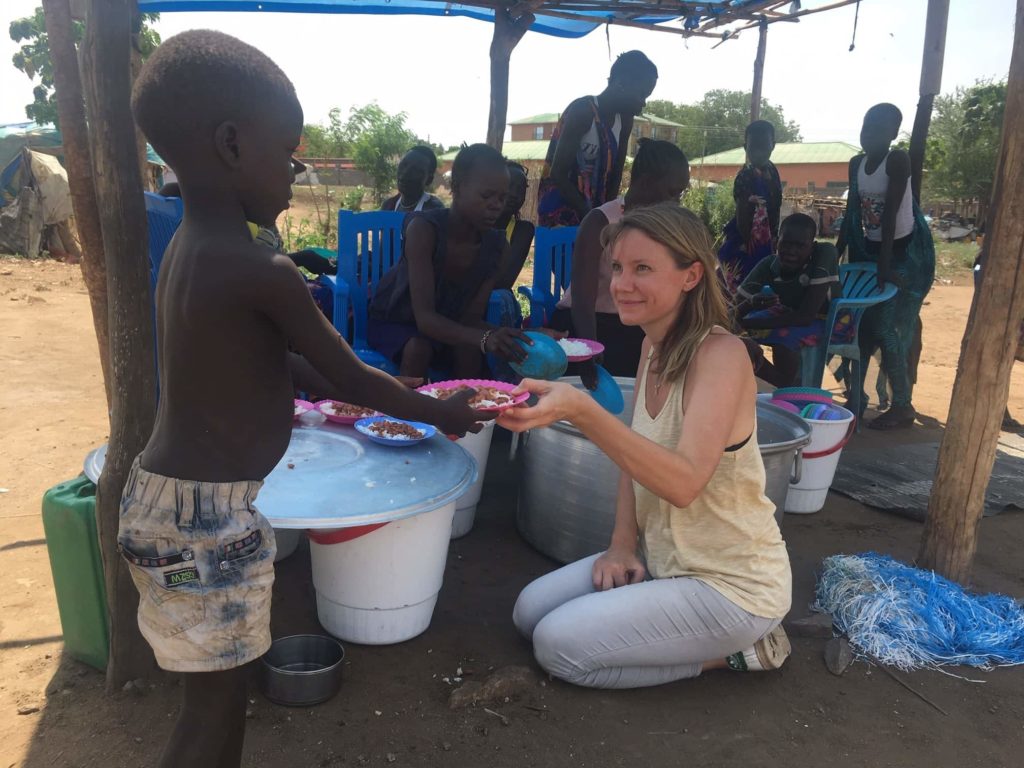 My second job: lunch lady at St Mary’s – and no, that’s not the local school (although I was a lunch lady once – but that’s another story).

But let’s start at the beginning. It was last Sunday that we arrived at the cemetery at 8.30. The first thing that greeted us was the music that was playing in front of the church. Three men with two drums and a horn that was longer than the man playing it. Cyrille took the opportunity to dance with the other people, which consisted of jumping up and down until you were in a sort of trance-like state – which I think Cyrille liked…..

Michael asked if we would go to mass – he didn’t say that it was two and a half hours long. I stayed (Cyrille lasted about 20 minutes). To my horror I had to get up to say something. Not being very gifted in talking to lots of people, I introduced MealEspoirs and thanked the community for letting us work there, the vicar translating into Bari – the language that is spoken by the people there. On the left were the men and on the right were the women, all in their best clothes. At the back were the children, kept in order by the sisters, who I don’t actually think were sisters, but in their white robes they looked like them.

For lunch it was lentils – which I learnt is called ‘adis’ – and rice. When everything was cooked the children came from where the where waiting, through the handwashing station, and down to the food. There were children that were just walking, being led by their brother or sister, all of them with bare feet. The children were meant to come through five at a time – but I think the number was sort of lost in translation and there were frequently 10 trying to wash their hands, bowls, bodies – all at the same time. At last the children that came were fed – and only a couple of plates of food spilled, which was almost the end of the world to the children – until they got another plate of food to replace it.

After the washing up and the clearing up, and planning the next week with the two Marys, who were the leaders of the small committee of women who helped – it was nearly 4pm.

It had been a day of highlights – the tiny girl in a swimsuit who came to get her food and took it away so carefully – and almost lowlights – when I thought we had run out of food for the last two children. But definitely a day to be remembered.